Internationally acclaimed magicians and illusionists Ollie Collins and Alonso De Luca  (aka the Showmen) are bringing their outrageous blend of magic & illusion to Nailsea this Christmas. Forget the cheesy magic of the bygone era, you won’t find any rabbits in hats here but you will find things aren’t always as they seem and often with hilarious results! This action packed LIVE show features amazing sleight-of-hand, grand illusions, showgirls, side splitting comedy, classic sideshow routines and plenty of Christmas cheer; All performed with the duo’s fresh and unique style that has left audiences across the globe both in awe and rolling on the floor laughing.

Ollie Collins is a master of digital magic with over 11 years performing professionally, his work has taken him across the globe appearing on board prestigious cruise ships, in hotels, theatres and high profile corporate events. With his innovative approach to the art of magic, Ollie has developed a 21st century performance that features stunning visual FX and the use of the very latest digital technology to create vibrant and stunning visual illusions that truly have to be seen to be believed.

Local Native Alonso ‘AJ’ De Luca is from a long line of performers and now marks the 3rd generation of variety performers in his family. Having grown up working within his parents’ magic act, Alonso has been performing most of his life and is now a multi-award winning comedian, magician, writer and variety performer. Having worked in over 25 countries to date and with numerous television and stage appearances, Alonso has performed in a multitude of venues including theatres, circuses, on board cruise liners and has even been commissioned to perform for Royalty. De Luca is a new breed of performer that mixes the classics with a modern twist, combining witty and observational humour with slick magic and circus stunts that guarantees to both amaze and amuse! 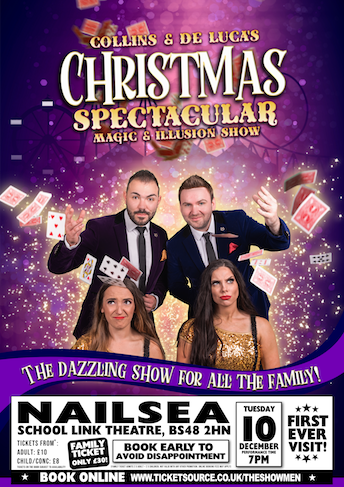